Yantr / यंत्र is a Sankrit word which means ‘Machine’. Yantr is an Indian Street Artist with a vision to make socio-political issues accessible to the general public through the medium of street art. Yantr’s work revolves around the complexity of machines and organic forms, mixed together in his signature eclectic style. Before becoming an independent artist, he garnered several years of experience in the creative advertising world working as an art director for various ad agencies in India. A travel enthusiast, he has biked extensively through India using his art as a means to initiate debate on issues he is deeply passionate about. He is also interested in land art and makes large scale interventions regularly. Yantr is now managed and represented by Transhuman Collective – a multi-disciplinary collaborative agency based out of India.

Yantr is actively protesting and creating awareness to Save the One Horned Rhino in Assam. He has created massive murals across the state and plans to do more, covering all the districts.

This piece was created in Guwahati, Assam, to raise awareness against the extinction of butterflies in that particular area.

Part of the St.Art Festival Delhi, this unique project covered 978 meter of Tihar Jails wall, claiming to be the longest Mural in Asia. Yantr painted the main entrance depicting the change of heart the convicts goes through once inside. “The theme of my graffiti piece is reformation. I have painted four hearts in four frames indicating a bad person going to jail, undergoing reformation and coming out a changed person,” said graffiti artist Yantr. “When people look at a jail, they think life inside is sad for the inmates. But this is not the case with Tihar. This is not a jail, but a reformation centre. And we want to send that very message through the graffiti,” said Tihar Jail spokesperson Sunil Gupta.

Paramāṇu Muskaan means ‘Nuclear Smile’ in Hindi. The piece is dedicated to Smiling Buddha : The assigned code name of India’s first nuclear weapon explosion, which took place on 18 May 1974. Energy at what cost ? Can you see the smile behind the mask ? This was created inside one of the Walls inside Khirki Village – New Delhi Part of the Khirki Street Art Festival.

Pradyushit : Polluted is a series of walls in Pune which raises awareness against water pollution. 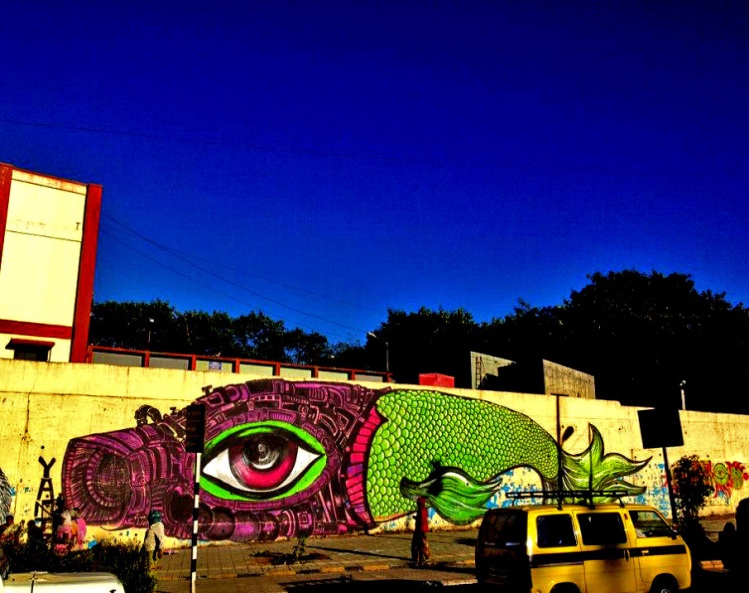 and this at the Kochi Muziris Biennale