An installation by the street artist Plastic Jesus appeared on Hollywood Boulevard on Feb. 19, just in time for the Academy Awards.

Looking divinely official and perverted at the same time, this was a street art installation by, Plastic Jesus, a venerable Los Angeles street artist who pulled off a similar stunt last year at the same Hollywood gateway.

The piece was up for only a couple of hours before an official from the Hollywood Chamber of Commerce ordered the installation removed at 11:40 a.m. The security team for Plastic Jesus was quick to disassemble the piece and cart it off before any conflict. (Last year, an individual claiming to be from the Academy got out of their car and tried to take down the heroin-injecting Oscar statue.) 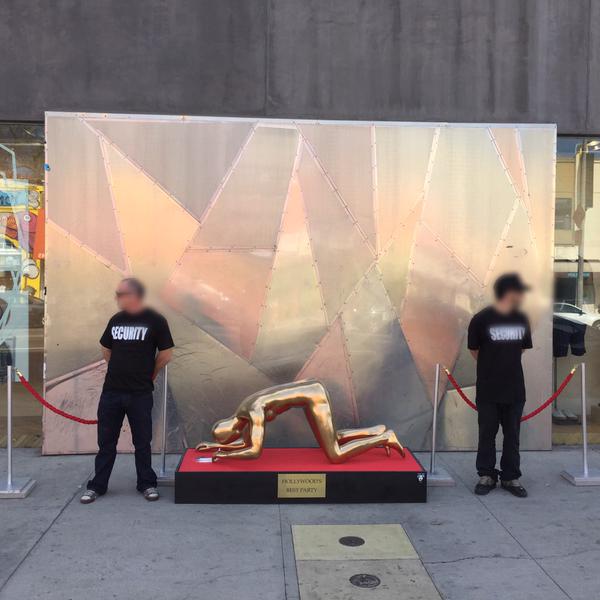 “My piece is intended to highlight general cocaine and drug use not only in Hollywood, but around the world,”   – Plastic Jesus

“I picked the Oscars because you often hear about A-list celebs who go to rehab or have drug-related breakdowns, but you don’t hear about producers or writers or electricians, who are also affected,” he added.

This isn’t Plastic Jesus’ first inflammatory street installation. Last year at the same time he placed a similarly drug-themed statue near Hollywood Boulevard, though it was quickly removed.

In fact, most of his street art seems to target the world of celebrity.

A reporter asked Plastic Jesus about this year’s Oscars installation and his street art.

Why did you do this piece?

PJ: To bring attention to LA’s cocaine addiction. Too many people will head off after the show and indulge in coke.

How did you fabricate the piece?

PJ: It’s made from a fiberglass figure. All the body joints have been reshaped.

Where and when will the piece be displayed again, if at all?

PJ: Melrose and Stanley. Outside Urban Outfitters. On Saturday.

What is your message in this piece?

PJ: It’s time Hollywood and the USA started talking about drugs. The current drug war is not working. In 2014 cocaine outsold Coca-Cola.

Who is Plastic Jesus?

*this article has been taken from various sources online