The Oldest Living Things in the World: A Decade-Long Photographic Masterpiece at the Intersection of Art, Science and Philosophy

What a 13,000-year-old eucalyptus tree reveals about the meaning of human life.

“Our overblown intellectual faculties seem to be telling us both that we are eternal and that we are not,” philosopher Stephen Cave observed in his poignant meditation on our mortality paradox. And yet we continue to long for the secrets of that ever-elusive eternity.

For nearly a decade, Brooklyn-based artist, photographer, and Guggenheim Fellow Rachel Sussman has been travelling the globe to discover and document its oldest organisms — living things over 2,000 years of age. Her breathtaking photographs and illuminating essays are now collected in The Oldest Living Things in the World (public library) — beautiful and powerful work at the intersection of fine art, science, and philosophy, spanning seven continents and exploring issues of deep time, permanence and impermanence, and the interconnectedness of life.

With an artist’s gift for “aesthetic force” and a scientist’s rigorous respect for truth, Sussman straddles a multitude of worlds as she travels across space and time to unearth Earth’s greatest stories of resilience, stories of tragedy and triumph, past and future, but above all stories that humble our human lives, which seem like the blink of a cosmic eye against the timescales of these ancient organisms — organisms that have unflinchingly witnessed all of our own tragedies and triumphs, our wars and our revolutions, our holocausts and our renaissances, and have remained anchored to existence more firmly than we can ever hope to be. And yet a great many of these species are on the verge of extinction, in no small part due to human activity, raising the question of how our seemingly ephemeral presence in the ecosystem can have such deep and long-term impact on organisms far older and far more naturally resilient than us.

Above all, however, the project raises questions that aren’t so much scientific or artistic as profoundly human: What is the meaning of human life if it comes and goes before a patch of moss has reached the end of infancy? How do our petty daily stresses measure up against a struggle for survival stretching back millennia? Who would we be if we relinquished our arrogant conviction that we are Earth’s biological crown jewel?

Sussman offers no answers but invites us, instead, to contemplate, consider, and explore on our own — not as creatures hopelessly different from and dwarfed by the organisms she profiles, but as fellow beings in an intricately entwined mesh of life. What emerges is a beautiful breakage of our illusion of separateness and a deep appreciation for the binds that pull us and these remarkable organisms in an eternal dance — our only real gateway to immortality. 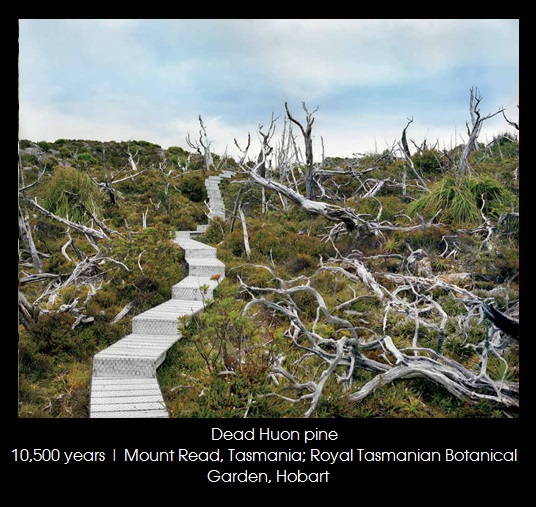 Indeed, it is this capacity for questioning that makes Sussman’s perspective particularly powerful. She herself, adding to history’s most beautiful definitions of art, considers it the supreme responsibility of the artist:

The role as an artist [is] to answer some questions, but to ask many more. 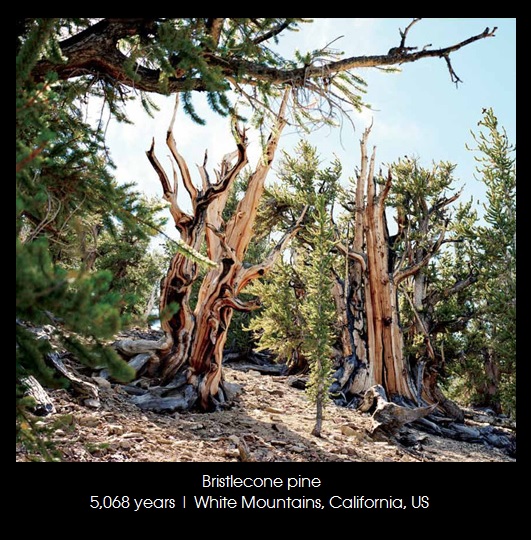 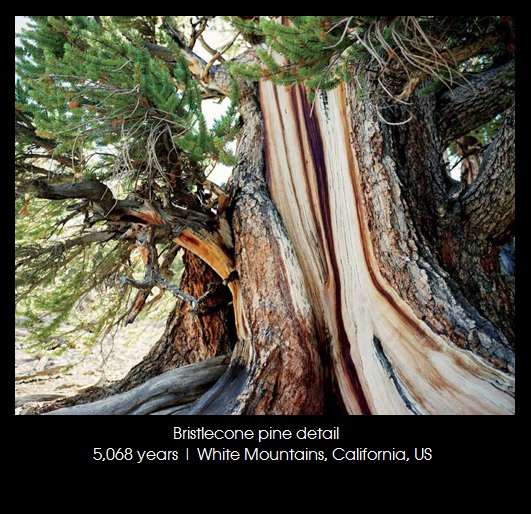 Sussman writes in the preface:

What does it mean when the organic goes head-to-head with the geologic? We start talking about deep time and the quotidian in the same breath, along with all the strata in between. All of these organisms are living palimpsests: they contain myriad layers of their own histories within themselves, along with records of natural and human events; new chapters written over the old, year after year, millennium after millennium. When we look at them in the frame of deep time, a bigger picture emerges, and we start to see how all of the individuals have stories, and that all of those stories are in turn interconnected — and in turn, inextricably connected to us all.

The oldest living things in the world are a record and celebration of the past, a call to action in the present, and a barometer of our future.

To be sure, the project has resonance far deeper and wider than a purely artistic pursuit. In a culture where 40% of people don’t believe the world is more than 6,000 years old — a kind of faith-washing known as Young Earth Creationism — Sussman’s work brings to light tangible, irrefutable, gloriously alive evidence of the scientific reality. After all, when beholding a majestic 13,000-year-old Eucalyptus tree, how can human arrogance dare deny its reality under the blindness of dogma?

Indeed, the exploration of deep time is one of the most powerful elements in Sussman’s work — certainly a scientific concept, in terms of being concerned with biology, geology, and astrophysics, but also very much a philosophical one raising enormously important, if unsettling, existential questions: Why are we here? How can we matter if we’re gone in the blink of a cosmic eye, the metaphorical minute of a Bristlecone Pine’s day? And, most importantly, what gives us the arrogance to consider ourselves atop the hierarchy of living organisms? We extol our intelligence as the uniquely human faculty that sets us apart from other animals, but even our definitions of intelligence are narrowly anthropocentric and based on things we humans happen to be good at. Surely there’s a special kind of biological and existential intelligence in an organism capable of such remarkable resilience — an organism that can outlive us by millennia and witness all of our fleeting struggles while it remains unflinchingly rooted in its particular corner of the ecosystem. 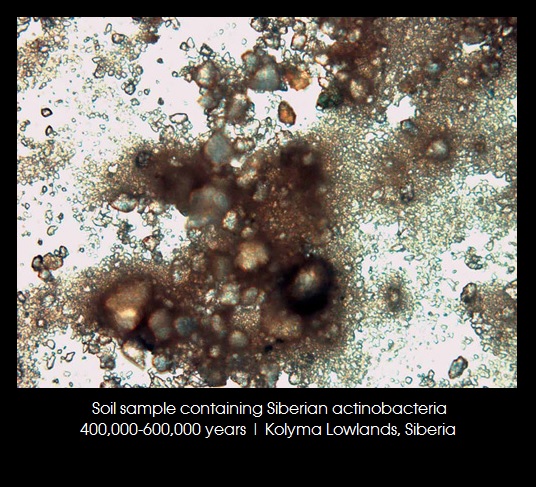 Because of its unique cross-disciplinary slant and dimensional scope, the book comes with two introductory essays — an art one by art-world legend and curator extraordinaire Hans Ulrich Obrist and a science one by Carl Zimmer, one of the finest and most respected science writers working today.

Obrist elegantly applies the late and great philosopher Eric Hobsbawm’s notion of “the protest against forgetting” to Sussman’s work and celebrates it as a living archive of remembrance. He writes:

The oldest living things may well not be a clear category science-wise, but it is a category that is defined by curiosity, humane character, a fascination with deep time, and the courage of an explorer.

In the science essay, Zimmer explores how lives become long and why the remarkable timescale of these organisms’ lifespans matters — not just scientifically, but also culturally:

The durable mystery of longevity makes the species in this book all the more precious, and all the more worthy of being preserved. Looking at an organism that has endured for thousands of years is an awesome experience, because it makes us feel like mere gastrotrichs. But it is an even more awesome experience to recognize the bond we share with a 13,000-year-old Palmer’s oak tree, and to wonder how we evolved such different lifetimes on this Earth.’

Even more fascinating than how much we know, however, is how much we don’t — many of these organisms stand as a testament to the “thoroughly conscious ignorance” that drives science. In a book chapter exploring the 2,000-year-old Stromatolites of Western Australia — a species composed of bound cyanobacteria that formed about 3 billion years ago and undertook the Herculean task of oxygenating our then-oxygen-poor planet — Sussman observes: 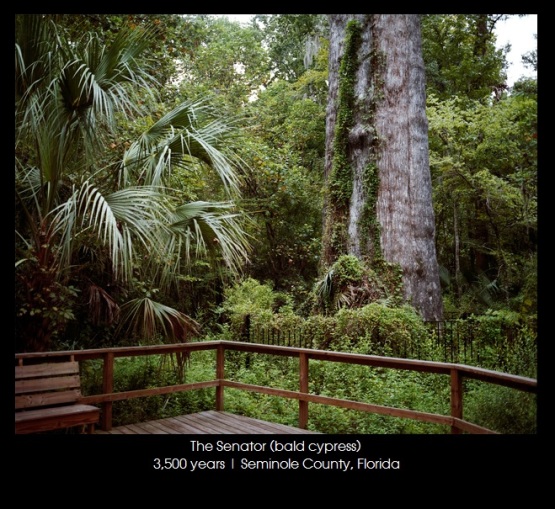 One of the most moving stories in the book is that of the Senator tree in Florida, one of the oldest Cypress trees in the world, which Sussman originally wrote forBrain Pickings a few years ago. She had photographed the Senator in 2007, but upon developing the film — Sussman shoots with a medium-format film camera for her high-quality fine art prints — she found herself unhappy with the result and resolved to return to the tree down the line. Since it was one of the most easily accessible organisms in her stable — what’s a sunny flight to Florida next to a harrowing weeklong voyage to Antarctica’s icy cliffs? — and since the tree had been around for 3,500 years, she figured it could wait.

Then, in January of 2012, news broke that a mysterious fire had burned the Senator to the ground. Unsettled and full of unease, Sussman immediately got on a plane to shoot the charred remains of the mighty tree, the only sign of its former brush with Forever. She poignantly observes:

Extreme longevity can lull us into a false sense of permanence. We fall into a quotidian reality devoid of long-term thinking, certain that things which have been here “forever” will remain, unchanging. But being old is not the same as being immortal. Even second chances have expiration dates. The comparative ease of access and the seeming lack of urgency bred a complacency in my return to the Senator.

The most devastating part? It was later discovered that the cause of the fire was a group of twenty-somethings who had broken into the park after dark, high on meth, climbed inside the tree, and lit matches or a lighter to “see the drugs better,” setting the Senator ablaze and erasing thousands of years of natural wisdom under the influence of synthetic senility.

But this story, too, is one of optimism. Sussman writes:

For the Senator, there is a chance at a second life: clippings from the tree were taken years ago and successfully propagated in a nursery. In February 2013, after a careful root-stabilization process, a forty-foot grafted tree was successfully transplanted back into the Senator’s original spot and has already sprouted fresh growth and gained in height. Four artisans and several institutions were selected to make works honoring the Senator’s legacy. The stump has been incorporated into the playground area.

Interwoven with Sussman’s photographs and essays, brimming with equal parts passion and precision, are the stories of her adventures — and misadventures — as she trekked the world in search of her ancient subjects. From a broken arm in remote Sri Lanka to a heart-wrenching breakup to a well-timed sip of whisky at polar explorer Shackleton’s grave, her personal stories imbue the universality of the deeper issues she explores with an inviting dose of humanity — a gentle reminder that life, for us as much as for those ancient organisms, is often about withstanding the uncontrollable, unpredictable, and unwelcome curveballs the universe throws our way, and that resilience comes from the dignity and humility of that withstanding.

The Oldest Living Things in the World is absolutely remarkable in its entirety — a true masterpiece of compassionate curiosity and cross-disciplinary brilliance. Alimited collectors’ edition is also available, housed in a gorgeous handcrafted, cloth-encased box, including a signed print of the Spruce image on the cover.