In 2011, DC Comics relaunched their entire line of comics in hopes of revitalizing their brand and attracting new readers. With The New 52 came a lot of controversy surrounding female creators and characters. The loudest public outcry has been over the perceived objectification of women in Red Hood and the Outlaws (by Scott Lobdell and Kenneth Rocafort) and Catwoman (by Judd Winick and Guillem March). Here, I intend to prove that the protests are justified and that the depictions of Starfire and Catwoman are indeed objectifying.

Historically speaking, the typical viewer of a work of art was a male, just like the typical comic reader is a male (heterosexual with disposable income). It wasn’t until fairly recently that the term “male gaze” was coined to give voice to these assumed eyes that were viewing works of art. It not only describes the perceived viewer but it also comments on how the work of art was, and still is, constructed in order to please this assumed male patron. A female is thus turned into an object when she is there solely to give pleasure to this male gaze. Conversely a female is treated as a subject when she is a fully-formed, three-dimensional character that is an active and vital participant in the story or image. In a single image a female can be turned into an object or treated as a subject. Women throughout art history have been objects meant to be looked at. Just like the Barbara Kruger piece on the right states: “Your gaze hits the side of my face.”

Art has a long history of images that cater to the male gaze. One of the best examples of this is Titian’s Venus of Urbino. It is little more than 16th century porn. Everything about her panders to the male gaze from her inviting smile to her soft features. Her anatomy is exaggerated to better please the viewer. Follow her arm as it lays across her belly. There is no bone underneath that flesh. An arm can’t bend like that. Follow her arm down to her hand. Is she covering herself up? Or, is she getting things started? She is like the Classical Greek sculptures of Venus who are surprised that you caught them, but are not upset in the slightest. They have inviting smiles and cover up to draw attention to the fact that they are nude. 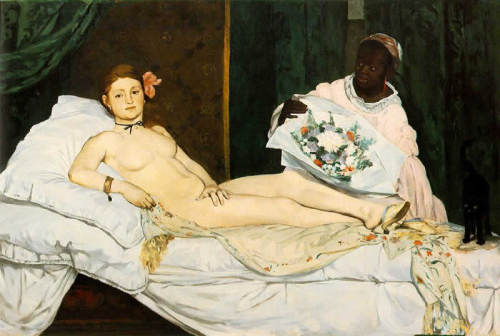 Here is a classic example of woman as subject. Edouard Manet’s Olympia is directly commenting on the Venus of Urbino and subverting it. She is a confident and defiant female. She is not a passive object but an aggressive subject. She is angular and rigid, not soft and round. The position of Venus of Urbino’s hand over her crotch signified her nakedness and her willingness, however with Olympia it signifies her control over the situation. Her hand isn’t resting or nestling, it is clamped down. The viewer will not participate in anything unless she permits. 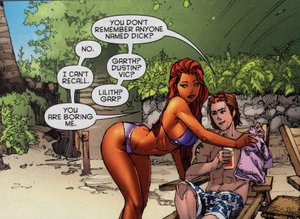 In Laura Mulvey’s groundbreaking essay Visual Pleasure and Narrative Cinema she uses Sigmund Freud and psychoanalysis to explain and criticize female objectification in film. Women are on display for the pleasure of the male viewer and thereby turned into objects of desire. The female may drive the male lead to act, or drive the plot forward, but the man is the one doing the acting. He advances the plot and continues the story. The female figure represents castration. There are two ways to escape from this anxiety: voyeurism (asserting control over the anxiety) or fetishism (turning the anxiety into a harmless object). In order to break females free from subjugation we must break free from conventional film making and depictions of women. Even if you do not buy into the castration part of the argument, it is clear how women in film are objectified using voyeurism and fetishism. 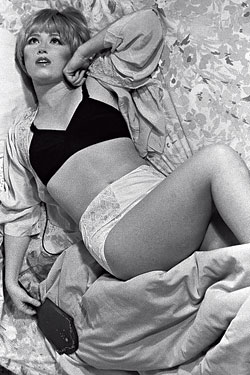 The female objectification in film described by Mulvey directly parallels that of female objectification in comics. Women are fetishized in much the same way. Comics are written and drawn for the pleasure of the male gaze. Typically, women are little more than window dressing. They are usually secondary characters who may help advance the plot but usually don’t actively drive the story. Women are treated as sexualized objects presented for the pleasure of men. They are not subjects or the focus of the plot.

Cindy Sherman brilliantly comments on females in film through her photography series Untitled Film Stills. She comments on both women as objects and women as subjects. Upon first glance the female in the image appears to be an object for the pleasure of men. However, Sherman is using the idea of the gaze and the tropes of objectification in order to comment on how we as a society turn women into objects. The female in Untitled Film Still #6, the image to the right, is layered with meanings through her pose and facial expression and thereby transcends objectification. She is the subject of the image and not the object of desire, especially as seen in her. 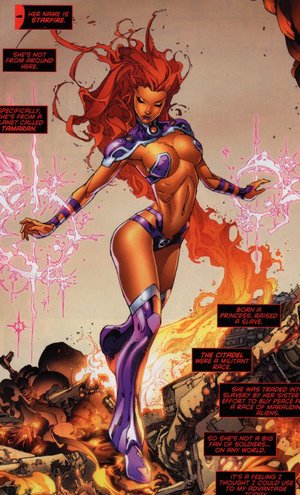 Red Hood and the Outlaws begins with Jason Todd (Red Hood) breaking Roy Harper (Arsenal) out of jail. We aren’t introduced to Kori (Starfire) right away but when we are we aren’t introduced to her as a person or as a character, instead we are introduced to her as a pair of breasts, or “pair of 38s” to be exact. The first image we get of Starfire is with her face directed downward in a pose of submission. She allows the male gaze, the assumed heterosexual male reader, to wash over her. She has just destroyed three tanks yet the focus is on her looks and her body. Her first words are: “Is there anything else I can do, Jason?” She is there for the pleasure of the males around her. As the comic continues we are presented with her in a bikini sexually posing in the water. There is a little boy taking pictures of her, letting us know that it is ok to be a voyeur. Starfire’s bodily postures are forced and unnatural, especially in the image towards the beginning of this post. Her back is contorted into an anatomically impossible angle. Just like the Venus of Urbino her body is unnaturally posed for the pleasure of the viewer. Throughout the comic we view her not as a person but as a fetish. Her objectification continues as she moves from an object to desire from afar to an object to possess through sex as she propositions Roy. In this comic sex isn’t about love or empowerment it is about enacting the fantasies of the reader. Roy poses a question to Starfire, “So, is there anything I need to know about making love to a Tamarean?” Her response is, “Just that love has nothing to do with it.” Earth men to her are boring and interchangeable. It is unclear whether or not she actually derives any pleasure from the physical act of having sex. The only thing that is clear is that she is there for the pleasure of those around her. Starfire’s storyline does little to affect the plot in this issue. If you remove her completely it does little to change the plot of the comic. All of the real action centers on the two males.

Catwoman is introduced similarly with the focus being on her body not on her as a person or a character. In fact, it is several pages before we even see Catwoman’s face. Instead of viewing her as a whole person we view her as a sum of her body parts: a breast, a mouth, a butt. Throughout the comic we are focused on her body and how she uses it. We are compelled to think about what she will do with those lips or those hands. Usually this is not in terms of her fighting skills but rather her sexual skills. She is made into an object meant for the pleasure of the male gaze even when she should be seen as a subject. When she is crashing out of the window of her apartment, when she is landing hard on a rooftop, when she is jumping off of a rooftop and when she is fighting her way through the party we should be viewing her as an action star but instead we view her as a fetish. In all of these instances she is posing for the male viewer. Her poses are forced and unnatural. She is basically winking at the viewer as she flies through the air. We notice her breasts and her hips, not her skills as a thief or as a fighter. She uses her sexuality to overcome the Russian mobster and then at the end of the comic she uses her sexuality again to overcome Batman. Instead of just beating up the mobster she attempts to seduce him which really serves little purpose other than to show her without a shirt on. She could have just as easily slipped into her costume and then approached him while he was alone in the bathroom rather than drawing him near with her breasts while he was alone in the bathroom. The final scene in this issue is of Catwoman getting Batman to submit to her desires. She is not being empowered as a woman she is merely acting out the fantasies of the heterosexual male reader, or possibly that of the male writer. The reader is a voyeur who is welcomed into the room during a supposed intimate moment.

The quintessential image of Catwoman in action in this issue is this panel:

Wonder Woman (by Brian Azzarello and Cliff Chiang) is a perfect counterpoint to the female objectification in Red Hood and the Outlaws and Catwoman. She is shown as sexual and yet she isn’t objectified. We are introduced to the other characters in this issue before we even catch a glimpse of Diana (Wonder Woman). When she finally arrives in the story she is naked, asleep in bed. She could have been portrayed as weak and vulnerable yet we see her as strong and assertive. From the moment she is introduced she confidently takes charge of the situation defining herself as a subject, as a three-dimensional character and active participant in the story. She is not there only as pleasure for the male gaze.

The difference is clear. Catwoman is made to be a sex object. She uses her sexuality, not her fighting skills, to get out of a dangerous situation. She is not sexually free and liberated, she is a sex object. There has been a shift in this society (as described in Ariel Levy’s book Female Chauvinist Pigs: Women and the Rise of Raunch Culture) to view sluts as empowered women, however this is not a true example of empowerment. This is merely a push for women to act like men in order to be viewed as equal. Wonder Woman is in charge of the situation and uses her fighting skills to protect and defend. We do not question Wonder Woman’s femininity and sexuality. She uses it when she protects and cares for Zola much like a mother would care for a child. Laura Hudson does an excellent job of voicing her opinions on this matter in The Big Sexy Problem with Superheroines and Their ‘Liberated Sexuality.’